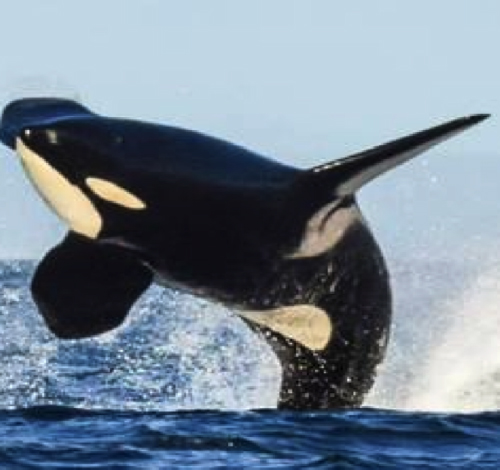 And still able to spring out of the water, balance for a moment on her tail before going under for the next laps in her Pacific Ocean domain, traveling with other members of her orca pod. All are in high spirits, breaching and tailfin slapping, momentarily released from their H2O milieu and apparently rapturous about the brightness of the sun and the massaging of their skin by surface breezes.

In August, the time of this picture, the pod had just completed an 800-mile journey from northern California to the coastal waters of Washington State, the Grandmother leading the way for her children, grandchildren, and great-grandchildren. Daily time was allotted for resting, foraging, and frolicking, the orca way for courting and conversing.

First spotted in 1971, the monitoring of this Grandmother, nick named “Granny,” has been made possible by distinctive markings near her dorsal fin and her half-moon shaped notch. The tracing of orca genealogy, a matrilineal species, reveals that the females become postmenopausal around 40, similar only to humans and to one other class of whale. But here’s the stunner with Granny. Estimated at 60-years-old in 1971—give or take 12 years—she is now in the centenarian category—100-years-old or more.

And look at her! If staring at her photo could transfer any small part of her ability to my grandmother body, I would spend a good part of the day at it. So limber, so buoyant, so full of life, and, as the Orca Network points out, a repository at this point of survival strategies for her progeny: aware of the best spots for salmon foraging in lean times, how to negotiate the waters that have become evermore crowded with fishing vessels, and even, it appears, how to shield herself and her kids from underwater noise pollution, a real threat to this species and other marine mammals who rely heavily on communicating among themselves for safety and for affection, especially between the mothers and their young.

It appears Granny has an adopted 30-year-old son who travels at her side and who may not survive for very long if she should die, a frequent occurrence in the lives of orca grans and the male children, though a direct causal link has yet to be found. Maybe sadness? A bit of a broken heart? Doesn’t seem out of the question.

Eastsound, a coastal town in Washington state, has recently made Granny its honorary mayor, certainly a well deserved decoration which if it could be communicated to the pod would surely initiate a round of frolicking and tailfin slapping. The only problem I have with her national recognition is the name with which she’s been tagged. Here is a creature whose life began around the time of the Titanic (1911) and whose durability seems in everyway superior to almost any other dynamo we might name. I ask you, who had the audacity to christen her “Granny” as if that belittling label for any loyal, caring nurturer of second and third generation progeny is in any way appropriate?