Living in the Listening 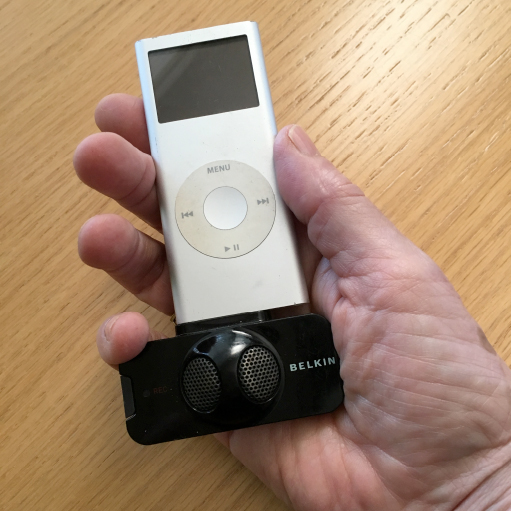 April 2007, on an impulse, I stepped into the Apple store in my local mall to check out the iPods on display. Smart phones had yet to arrive on the market. What I wanted to know was whether these small, sleek devices had a recording function? Specifically, could an iPod record conversations between Matthew, my seven-year-old grandson, and me? I asked, Tom, one of the sales associates.

“Sure, it just needs a microphone.” He retrieved a tiny black box from the rear of the store, attached it to an iPod and turned it on. We had a short conversation about the wonders of new technology. I put in the ear buds, dialed the recording, and listened to a nearly flawless replay of our exchange.

“I’ll take it,” I said, restraining myself from hugging Tom. My excitement came from never having to struggle with analogue devices again. Thank goodness I have survived to explore and exploit the advantages of the electronic age.

I got permission from Matthew and his parents to record the two of us: our stories—telling, reading, improvising—and conversations in the car, on walks, at mealtimes, as well as the dinosaur dramas that we enacted in my living room turned prehistoric habitat. When he turned 8, it was over. If Matthew was still telling stories, he wasn’t telling them to me. When I transferred the final recording, I realized I had accumulated several hundred files—and hadn’t listened to any one of them, my way to keep my self-consciousness at bay.

I stared at the list of files on the screen. Where to start? How to start? What if they were all duds or simply tedious, like listening to the birds sing—beautiful, but hours and hours of nearly the same thing can get really boring.

I put on the earphones and began at the beginning—the first recording, a Saturday in April, just after I bought the iPod and mic. And there we were, minute by minute, the conversation clear and close, as if it had just floated back to earth. Tears came to my eyes: Matthew’s voice so bright and musical, mine so eager and interested. The more I listened, the more I realized that here was a detailed slice of both our lives, an evolution of a friendship between a grandson and his gran born through our year of sharing stories and talk.

Transcribing our conversations—living in the listening I call it—turned out to be fun, a chance to relive our adventures in slow motion. With ample time for reflection, I probed connections between growing up and growing old, between memories accumulated in my seven decades of life and thoughts about my markedly shorter future. The friendship with Matthew became a medium that intersected childhood, motherhood, and grand-motherhood, adding much joy and understanding not just to our year of conversation and storytelling adventures, but also to the rest of my life, however long it may last.